Polls opened for the second round of the Latin American nation’s presidential election on Sunday, with former guerrilla leader Petro facing surprise rival Rodolfo Hernandez, a 77-year-old businessman who managed to build up a nationwide political following by relying on TikTok and Facebook.

The race between Petro and Hernandez was the tightest in the country in recent memory. 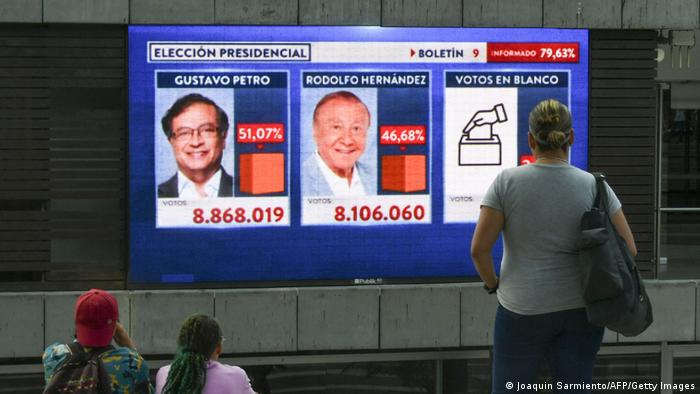 After the results, Petro tweeted, “Today is a day of celebration for the people. Let them celebrate the first popular victory. May so many sufferings be cushioned in the joy that today floods the heart of the Homeland.”

He issued a call for unity during his victory speech and extended an olive branch to some of his harshest critics.

“From this government that is beginning there will never be political persecution or legal persecution, there will only be respect and dialogue,” he said, adding that he will listen to not only those who have raised arms but also to “that silent majority of peasants, Indigenous people, women, youth.”

Hernandez conceded defeat in a video posted on social media.

“Colombians, today the majority of citizens have chosen the other candidate. As I said during the campaign, I accept the results of this election,” Hernandez said. “I sincerely hope that this decision is beneficial for everyone.”

The United States congratulated “the people of Colombia for making their voices heard in a free and fair presidential election.” “We look forward to working with President-Elect Petro to further strengthen the U.S.-Colombia relationship and move our nations toward a better future,” US Secretary of State Antony Blinken said in a statement.

Some 39 million people were eligible to vote in Colombia, a country where nearly 40% live below the poverty line and 11% are unemployed.

With the two anti-establishment candidates vying for the presidency, Sunday’s ballot was seen as a powerful rebuke to the country’s conservative elite and current president, Ivan Duque.

The 62-year-old Petro, a leftist with a reform agenda, comfortably won the initial vote last month by securing some 40.4% of the ballots. The result is a sensation on its own, as a large part of Colombia’s population harbors deep distrust of both his policies and his past in the now-defunct M-19 urban rebel group, which included two years in prison on arms charges.

But his supporters point to Petro’s plans to redistribute pensions, make public universities free and tackle the country’s inequality and poverty. He has also said he will put a stop to new oil and gas projects.

“We’re one step from achieving the real change we have waited for all our lives,” Petro said. “We are going to make history.”

Perhaps more surprising was that Petro faced Hernandez on Sunday. The former mayor of the northern city of Bucaramanga, who presents himself as a political outsider, managed to win over 28% of the initial vote and…

Weekly Horoscopes for the Week of June 20 by the Cut

Trump Fumes as Conservative Columnist Says GOP Is Rejecting Him Over Jan. 6

Trump and his allies will repeat Jan. 6 if necessary | Commentary

Opinion | The Bromance of Donald Trump and Rudy Giuliani

1/6 panel to hear of Trump’s pressure on Justice Dept.

Prince William Flies Into a Rage as He Confronts Paparazzi…

This Bitcoin Crash Is A ‘Crypto Ice Age’ —…

John Wall plans to sign with Clippers after receiving buyout from Rockets, per

Hurricane center has eyes on 3 Atlantic systems; 1 expected to develop…